Here's a random philosophical question -- just something that occurred to me when I noticed a foreign coin (I think it was a Spanish euro) in a charity donation box.

Suppose you have access to one of those boxes, whether legitimately or just because it's open at the top, and you see a particular quarter you'd like to have. Is it acceptable to swap it out for a quarter of your own?

Sounds obviously fine, right? For instance, if you collect state quarters and you're only missing Maine, and you see one in the box, it doesn't hurt anyone to swap it for that extra Florida quarter you have on you. (And have grown to resent a little more every day for not being Maine. Poor Florida.)

But what if it's not just any quarter? What if it's that rare 2004 Wisconsin state quarter with an extra leaf that's worth $300 to collectors? Can you make the swap then?

You can probably assume the donator didn't know he was putting something that valuable in the box. (If he did, why would he just count on somebody at the charity recognizing its value?) He only intended to give a quarter. The charity will probably only USE it as a quarter. You may be the only person at any point in the chain who notices its value.

And yet... that quarter IS in the box. It's the property of that charity now. If you swap it out, a total of $299.75 has gone from the charity's possession to yours. It just won't know that -- because it didn't know it had that amount in the first place, and will in fact NEVER know either way.

So, in this second case, is the swap acceptable or not? If not, does that apply even to a quarter worth 25.0001 cents? If so, does that apply to a quarter worth a million dollars? And what makes this feel so different from the first case? Almost all the variables are the same -- the coin is worth more not to the donator or the donatee, but only to you. Why is it important that in the second case, other people who aren't even involved will agree that it's worth more?

(Please note: This is completely hypothetical. I have no access to a box like this -- even the one I saw today was closed -- and I also have no idea what coins are valuable. I had to google an example.)

Fortunately, we don't have to guess what his last message to us would be. He put those words in Reed Richards' mouth 51 years ago. And what could be more Stan the Man than writing his own eulogy? 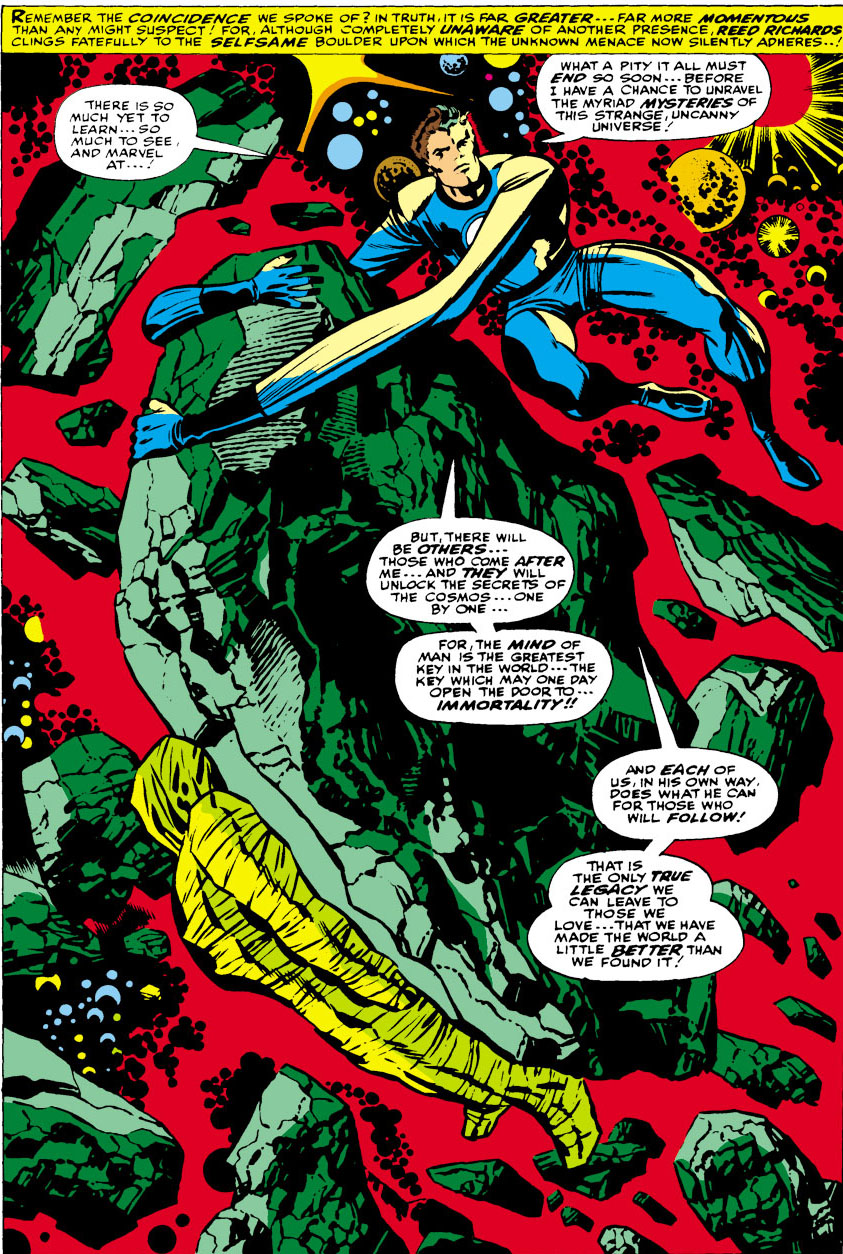 So I checked out the new (2012) Ninja Turtles cartoon. Pretty good, though I really don't get the heavy anime influence. Ninja itself may be Japanese, but the Turtles are American, so why are they saying "hai" to Splinter and having their moods indicated with anime symbols? (I didn't see any sweatdrops, but they used that red sharp sign for anger...)

However, that's not what blew my mind. Several of the voices sounded familiar, but the one that kept bugging me for the whole episode was Donatello (my favourite turtle, as if you had to ask). Turns out he's got a long voice-acting pedigree and doesn't just use the same voice for everybody. His biggest roles have been Arthur from the Tick, Yakko Warner, Pinky of "and the Brain"... and Raphael in the original Turtles cartoon!

You can't DO that! They're totally different! Raphael is cool but rude! (Give him a break!) Donatello does machines! (That's a fact, Jack!) You can't just swap them willy-nilly! You might as well make Michaelangelo's nunchuks actually useful by sticking, like, a blade or somethi--

Why, Nickelodeon? Why are you messing with our heads?

(Want to be really freaked out? Watch this interview and see Yakko's voice coming out of an actual human being.)

There are lots of interesting math pages around. Here's an oldie-but-goodie: What's Special About This Number?, a page that's been online about as long as my own. The maintainer, Erich Friedman, is out to tell us something mathematically interesting about as many of the counting numbers as possible. This is a task which in one sense can never end... and in another sense already has.

But wait! First, second, third... those numbers are interesting. Everything less than 391 is. So in fact we can fill in the first 390 of those omissions with "the #th uninteresting number". Now we've found something interesting to say about them!

Okay, but what about the rest of our list? We've only removed 390 out of an infinitude of entries. Let's call the surviving numbers not just uninteresting, but "level-2" uninteresting. Surely they're beyond saving.

But wait! There's a first level-2 uninteresting number, a second, and so on. Up until the 391st, those are interesting things to be! Now we've got facts to cite for another 390 numbers. Go us! What's more, we can continue this process with levels 3, 4, and so on of uninterestingness...

Until we get to level 391, that is. 391 isn't interesting, so neither is that level! There are still infinitely many numbers on our list, but now they're beyond the reach of our level system. The surviving numbers are a whole different kind of uninteresting. They're so uninteresting we don't have the words yet to talk about how uninteresting they are. They're some kind of super-uninteresting.

Say, wouldn't it be interesting to know what the first super-uninteresting number is?

You get the picture. I leave it as an exercise for the reader to show that this process can be carried on forever, assuming we're allowed to come up with a new word for each level of uninterestingness. (This is not the same as just making up words willy-nilly; we're not describing, say, 4637 as "the first vreemish number", where "vreemish" is defined to mean "4637 or higher". Our words come from the process above, so they aren't arbitrary.)

"Hold it!" you may say. "There was nothing special about the number 391 in that proof. It would have worked no matter what the smallest unlisted number was!"

I know, right? Friedman must be some kind of workaholic. He could've just listed a fact for 1 and called it a day.

(Note: The above is a rephrasing/overcomplication of the old "no boring numbers" joke. I think I first read it in Martin Gardner. Some of you probably recognized it early on, so thanks for not interrupting.)

A while back I ran into a K-ON! fic where Mio is asked what one person she'd most like to meet, and for some reason she says President Obama. Ever since then, I've had the idea for this fic on the backburner. It's set sometime in 2010. Take it with an entire salt lick.

No real people were harmed in the production of this fic. Of course, if you choose to identify someone not named in narration with a particular real person, that's YOUR business.

Note to all manga and anime characters:

CPR does not count as your "important first kiss". Honest. It doesn't go on your permanent record. Not even the pickiest etiquette expert would say otherwise.

It's okay. You can find another plot device now.

Well, November is upon us, it's an even-numbered year, and that means it's time for my biennual* Election Day post.

I'm reluctant this year, but not because I don't have anything to say. On the contrary, I have strong opinions on American politics right now. I could go on for pages (and would have done on several occasions this past year, if I weren't so lazy). No, the trouble is what happened last time.

* Apparently that's the word for once every two years, semiannual is for twice a year, and biannual amusingly but inconveniently swings both ways.

And now, my first post typed on a Blackberry. (But not actually posted from it; I don't have a data plan yet.)